Unfortunately, it’s been a while since my last post, but this only means there’s more adventures coming soon!

I can’t believe I’m saying this, but Minneapolis is pretty cool, y’all.

So, I’m on this mission to visit all 50 states. Unfortunately, I was only 25 states into this adventure at this point, but on the bright side, that means I have a lot more adventures ahead!

For some reason, I decided to pick Minneapolis, MN as my city/state last year. I’ve always heard good things about the city, but to be honest, there are other places higher priority on my list. Basically, it all started when I was talking with my friend Shannon (who lives in Iowa) one night and casually mentioned it which then turned into, “Let me look at flights”, and then into, “Book a hotel room. We’re going to Minnesota for Memorial Day!”.

I’m not even sure I can count this as day one, but we’re going to roll with it… My flight landed about 11:30 p.m. that Friday night where I was greeted at the airport by Shannon and her friend Sol, who lives there. We didn’t waste a minute before going back to the hotel, dropping off my suitcase, and heading to a bar. First stop, Brit’s Pub! Super cool spot a few blocks from our hotel downtown. [We stayed at the Marquette which was really reasonable and in a great location!] It wasn’t too busy, but we made our way up to the rooftop patio (on the second floor) where there is a huge lawn bowling, errr… lawn? I don’t think the general public is allow to play on it, but it’s cool that it’s there for the lawn bowling league. We met some really nice local guys who were willing to show us around. 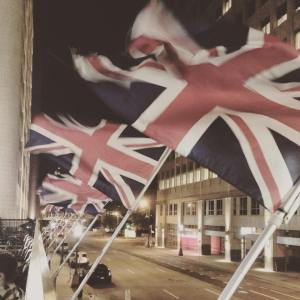 They were going to Crave (also a few blocks away) and invited us to come along, so, we did. Along the way, I noticed a bar that caught my interest, The Local, and they guys were nice enough to take a detour. We had a drink there and then walked with them to Crave in just enough time for the bar to close.

With all the research I did, I can’t tell you how many articles and blogs I read that suggested Hell’s Kitchen as [one of] the best brunch restaurant in Minneapolis. Again, it was only a few blocks from our hotel, so it was a no-brainer to see what all the fuss was about. It’s safe to say this place exceeded my expectations. The food, incredible. Bloody Mary, incredible. Atmosphere, INCREDIBLE. Not one complaint about this place. Not. One. [Note: Be sure to make reservations or else it might be hard to get a table!] 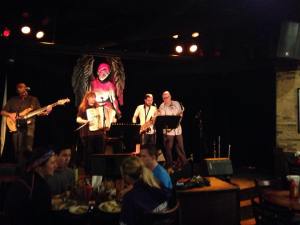 Afterwards, we decided to hop on the light rail and head over to Minnehaha Falls. We accidentally got on the wrong train because neither of us was paying attention to the line color when it arrived, but it’s very easy to navigate and really convenient. We were able to take the blue line straight from downtown to the Falls which was right across the street from the stop. It’s not super impressive, but it is a very nice park with lots of shady paths and a restaurant on site called Sea Salt. The line was super long and we were still stuffed from brunch, but you could tell people love it!

From there, we took the train back downtown and walked to the Stone Arch Bridge where we ended up walking across the bridge and over to Tuggs Tavern on the river. It’s a beautiful part of the city with cobblestone streets, big trees, and plenty of restaurants with patios to choose from. After having a drink or two, we walked a few steps over to the Nice Ride bike rental rack, grabbed a bike, and rode back to our hotel where we could drop them off for a small fee of $6 for 24 hours. You should definitely take advantage of this while you’re in the city. There are plenty of locations to pick up/drop off the bikes and it’s a fun way to get around!

We got cleaned up and headed to dinner at a Sushi spot in the Warehouse District, and then met some friends of Shannon at Smack Shack for some drinks a few blocks away. From there, they were kind enough to take us to Psycho Suzi’s Motor Lounge which I had previously seen on the show Best Bars in America on the Esquire channel. Thankfully, the Minneapolis episode aired just a few weeks before our trip and I saw this and immediately added it to the list. Absolutely one of the best choices we made that trip. This is a tiki bar on the Mississippi river that is the true definition of “tiki bar”. They have a lot of really good tiki drinks that are oh-so-dangerous. This is also a must if you’re visiting this city.

We took our time getting up in the morning, but the night before, we decided to go to Union for brunch since it looked like another good spot to check out. Again, reservations are necessary because it was packed. My friend, Jenna, who is a flight attendant, and Sol met us which was a lot of fun. We were put at a table in the corner by the DJ and had a great view for people watching. It was loud and almost a bit rowdy at times, but the food was really good and they have a good mimosa special. I wish it wasn’t raining that day because it’s also a rooftop restaurant, but they have a retractable roof which still gives it a fun atmosphere!

Minneapolis is one of the top cities for breweries in the U.S., so of course, we had to taste some local brew. We chose Surly since it’s one of the largest (which I typically wouldn’t do, but I like to see what the fuss is about), and it looked like they could use more space! So many people were there, which is good, so we enjoyed a beer, but left before getting another. 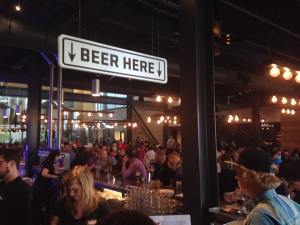 Sol then took us to a cute, little book store in Uptown where we spent some time before heading back to the hotel room to get ready for dinner. Another restaurant I saw on Best Bars in America was Butcher and the Boar. Any place that specializes in meat, whiskey, and beer is my kind of place! Their restaurant ranges from $31+ plates, but there is a beer garden in the back that has a different menu and is a little more casual. They also offer a $12 beer, brat, and a shot deal. It’s nothing elaborate since you get a plain brat and not one of the special ones with the deal, but it was still one of the best bratwurst I’ve ever had. 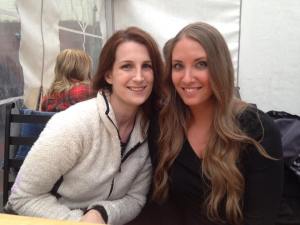 We talked about going to the Twins game on Memorial Day, but we both decided we wanted to experience a little more of Minneapolis before leaving. We heard about Red Cow in the Warehouse District so we went there for lunch. Another good choice. My burger was delicious! We explored the area a little more before driving down to Uptown where we did some window shopping and getting an infamous chai tea latte from one of the local coffee houses.

We fit a lot into 3 days and I still feel like we didn’t see enough. Needless to say, I was pleasantly surprised with Minneapolis. I’d actually consider moving there if it didn’t get so cold, but my Southern blood wouldn’t be able to survive that. It’s a great summer city and the people there were really nice — Check it out!