I’ve been slacking on my posts lately, but I have a few coming soon that (I hope) will make up for the lost time.

What brought me to Des Moines, you ask? Chris Soules. You know, the next Bachelor? I hear he lives in Iowa and I’m a woman on a mission! But… not really. I’m kidding. Though, I wouldn’t have hated running into him, and if he’s somehow reading this — Call me, Chris! 🙂

Anyway, back to business…

A few years ago, one of my good friends from college moved to Des Moines, IA after graduation. Over the years, Shannon and I kept in touch and she eventually lured me out to the land of corn fields because… she was getting married!

The Friday before Labor Day, I started my voyage to this charming, Midwestern city. Her wonderful fiance, Matt, picked me up from the airport and we headed to the Downtown Marriott to meet the crew.

We started out the night with most of the bridesmaids and their husbands at a restaurant which was followed by a trip over to Up Down, an awesome, vintage arcade games bar. Seriously, so cool. We played Mortal Combat, Pacman, Ski-ball, pinball machines, and the best of all, Michael Jackson’s Moonwalker! They even have an area set up in the back corner that looks like a living-room and you can play Super Mario.

The bride-to-be left a little early to catch up on some rest, but the groom took the few of us bridesmaids, that were left, out to a local brewery. Unfortunately, I can’t remember the name [FAIL]… It was a pretty large place and the bartender upstairs was one of the friendliest I’ve met. They had a small, but good beer selection — I had a oatmeal stout with a touch of vanilla porter mixed in and. It. Was. Delicious.

Day 2 was full of wedding festivities. We had the rehearsal at Jasper Winery, watched the Alabama football game (ROLL TIDE!), and then scurried off to Exile Brewing Company for the rehearsal dinner. It was a fantastic venue! We had the whole downstairs bar and patio. It used to be a warehouse so they had one of the giant, garage doors open and the weather was soooo nice. Two thumbs up for this place. 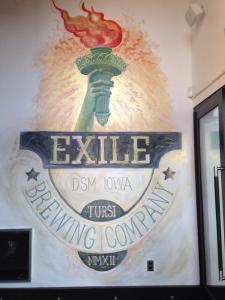 Day 3 — Wedding day! We had a bridal brunch at Centro which was just a few blocks from the hotel. The food there was amazing. If I find myself in DSM again, I will go back.

The wedding was at a beautiful winery, and the couple was beautiful, and everything about it was just… beautiful! It was so fun seeing old friends and catching up with people that I really should see more often. We all had a great time and danced the night away!

All in all, Des Moines is a great city. Very clean, people are nice, and they’re really doing a lot to build it up and make it a cool place to visit and live. I’d definitely suggest anyone to check it out if you’re in the area.

Stay tuned — Chicago is next!